How to set Status Bar Style in Swift 3

In previous version, UIViewController have method to set the status bar style

However, I found it changed to a "Get ONLY varaiable" in Swift 3.

How can provide the style to use in my UIViewController?

This is the preferred method for iOS 7 and higher

Override preferredStatusBarStyle (Apple docs) in each of your view controllers. For example:

If you have preferredStatusBarStyle returning a different preferred status bar style based on something that changes inside of your view controller (for example, whether the scroll position or whether a displayed image is dark), then you will want to call setNeedsStatusBarAppearanceUpdate() when that state changes.

Apple has deprecated this, so it will be removed in the future. Use the above method so that you don't have to rewrite it when the next iOS version is released.

In appDelegate.swift, the didFinishLaunchingWithOptions function, add:

when I used to each view controller, but this worked:

If you want to change the statusBar's color to white, for all of the views contained in a UINavigationController, add this inside AppDelegate:

Hope this helps those who haven't succeeded with the accepted answer!

In Info.plist add a row called "View controller-based status bar appearance" and set its value to No.

You can also do this in storyboard

You will have to do this for each navigation controller you have. However, any views under that navigation controller will change all the view's status bars style/color to the one you just selected. I find this option better because you can see your results instantly and do not have to add extra lines of code in every view controller.

This article is left intact for anyone willing to understand the logic behind different approaches that were present for the past several years. Meanwhile, as of Xcode 10, Swift 4.2 first approach is deprecated and is no longer supported (i.e. will not take effect if you try to employ it). It's still referred for your information to better understand the reasoning behind Plist.info flag and customizing practice.

It is very important to understand two approaches to customizing the status bar appearance. They are different and should not be mixed.

First approach – one color for whole app (DEPRECATED since iOS7)

In info.plist you find or create a key called

and set it to NO.

What it does? It essentially establishes a setting that says that in your application, status bar appearance is not defined individually by each view controller. This is super important to understand. This means that you have uniform setting for entire app, for all screens. There are two settings: default, which is black text on white background, or lightContent, which is white text on black background.

To set one of these up (one setting for all screens):

This way you won't need to reestablish this setting on each view controller. However, you can always resort to this method to voluntarily change appearance.

This is the opposite. To make it work, go ahead to info.plist and set

This way, whenever a new view controller is open, status bar style is set individually if you insert this implementation in each UIViewController instance you need:

You have the same as in first, set either dark or light style for statusbar, individual to each view controller.

This property is fetched by UIKit in two scenarios:

In latter case, you are eligible to manipulate the statusbar appearance by the following code:

Then, whenever you call toggleAppearance(), statusbar style change will be triggered.

There's a hack which allows to access statusbar directly:

Why hack? If you need status bar color other than black or white, you use undocumented API. You get statusBar object using KVC and set its background color. Object you get this way is UIStatusBar, which is derived from UIView and thus naturally supports backgroundColor property. This is dirty, not legal way, but so far it's the only way to set up custom color for statusbar (not taking into account UINavigationBar approach, which allows to customize navbar+statusbar appearance altogether). It may well lead your app to being rejected. But maybe you're lucky. And if you are, in certain complex circumstances (like hierarchy of nested, child navigation and view controllers) this may be pretty much the only, or at least the less troublesome way to customize statusbar appearance (for example, to make it transparent)

There are no alternatives any more: developer should let each view controller define statusbar appearance, by setting the flag to YES (or omitting this action, because it's YES by default) and following above instructions.

Hack-based solution you might (although not encouraged to) use in complex circumstances in order to voluntarily change statusbar appearance at any stage. Color-wise, the following extension method does exactly what you could have done with regular approach. You can adjust it to your needs.

Most of these answers are the same thing re-hashed, but none of them actually address the launch screen for me when using a dark background.

I got around this with the following in my info.plist which produced a light styled status bar.

There seems to be a small issue about the status bar text colour when dealing with navigation bars.

If you want the .plist entry View controller-based status bar appearance set to YES, it sometimes won't work when you have a coloured nav bar.

The code above won't work even if you have set the following in the AppDelegate:

For those still struggling, apparently it somehow judges if the status bar needs to be light or dark by the styles in the nav bar. So, I managed to fix this by adding the following line in viewWillAppear:

When the bar style is black, then it listens to your overridden variable. Hope this helps someone :)

If you want to set status bar style, application level then set UIViewControllerBasedStatusBarAppearance to NO in your .plist file. And in your appdelegate > didFinishLaunchingWithOptions add following ine (programatically you can do it from app delegate).

if you wan to set status bar style, at view controller level then follow these steps: 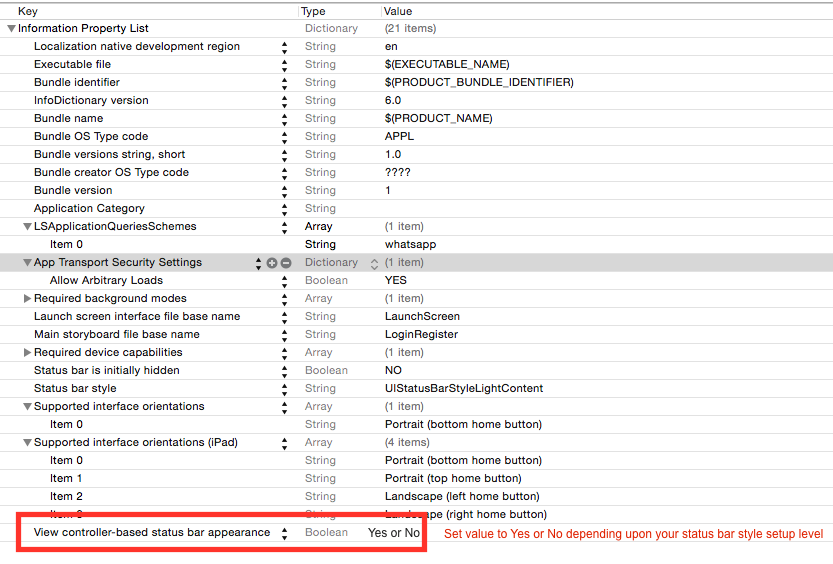 If you're using modal presentation you need to set:

In case you are using a UINavigationController, the preferredStatusBarStyle will have no effect on the UIViewController.

Use an extension for an app level solution:

For people looking to change status bar for all viewcontrollers on: iOS 11, Swfit 4/5 solution is pretty easy.

If you want to change status bar only for one viewcontroller, on viewDidLoad add:

Changing status bar do not work trying to do push(navigation controllers), only on presenting modally viewcontrollers.

To add more detail for PRAVEEN's answer at https://stackoverflow.com/a/40066798/2082851, I would like to provide my implementation. It supports the flexibility to customize each controller's status bar.

In overall, we will create a BaseViewController which handle the statusBarStyle property in all the case. When you create a new controller, make it as subclass of this base controller.

Whenever you want to change the status appearance, you only need to update this property. The status bar style will be updated immediately.

For UINavigationController, it is a special case, which you can follow either solutions:

Solution A: Override with message dispatch

Since UINavigationController is an NSObject and inherit from ObjectiveC, its methods are message dispatch and you can override them.

If you already have a custom UINavigationController (which usually need to control more requirements), this is the best solution for you.

First step you need add a row with key: View controller-based status bar appearance and value NO to Info.plist file. After that, add 2 functions in your controller to specific only that controller will effect:

In iOS 13 you can use .darkContent UIStatusBarStyle property to display dark status bar

You can using a bool property named "shouldStatusBarDark" to toggle you status bar color. And you also could update its value to change the status bar color when you scrolling.

You could try to override the value returned, rather than setting it. The method is declared as { get }, so just provide a getter:

If you set this conditionally, you'll need to call setNeedsStatusBarAppearanceUpdate() so it'll animate the change when you're ready

If you want to change the status bar style any time after the view has appeared you can use this:

This worked for me

Swift 4.0 Please use this code in "didFinishLaunchingWithOptions launchOptions:" Appdelegate class

To set the same appearance of navigation Bar across your app, you can do this in AppDelegate.swift:

You may try using this method:

You need to add below key in your Info.plist file:

In your appdelegate class, in didFinishLaunchingWithOptions method before return.

change backgroundColor and statusBarStyle as per requirement.

then use this extension for all NavigationController

if there is no UINavigationController and only have UIViewController then use Below code:

If you are receiving the warning: Setter for 'statusBarStyle' was deprecated in iOS 9.0: Use -[UIViewController preferredStatusBarStyle], then to set the status bar to light or dark use the following code:

This will not make your navBar change it purely indicates the style and therefore changes the status bar accordingly.

NB. You need to ensure that you set in your info.plist.

I was struggling with this too, so if you are presenting a FULLSCREEN modal view controller, make sure to set .modalPresentationStyle as .fullscreen and then, on your presenting view controller, just override .preferredStatusBarStyle to .lightContent.

If you want to change the status bar in the whole app.

Run your project and check it.